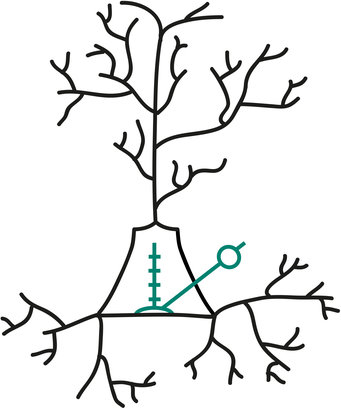 The idea that the brain generates predictions about the external world has been a leading neuroscience theory in the past two decades (Rao & Ballard, 1999, Friston, 2010). Predictive processing depends on the extensive recurrent connectivity within and between areas, which is a hallmark of the cerebral cortex. Recurrent interactions also give rise to neuronal synchronization and cortical rhythms, which are known to further modulate the functional and structural connectivity among neural populations. This raises the question: What role do brain rhythms and synchronization play in predictive processing?

One of the most influential proposals of how predictive processing is implemented is hierarchical predictive-coding theory which posits that perceptual inference is implemented by the feedforward routing of surprising or unpredicted signals (i.e. prediction errors), and the distribution of sensory predictions down the hierarchy via feedback projections.

One major theory that emerged from electrophysiological investigations is that FF (error) and FB (prediction) signaling use distinct frequency channels, namely gamma and alpha/beta rhythms, respectively. Yet an alternative theory that emerged in recent years (Vinck & Bosman, 2016) is that gamma rhythms emerge when sensory information is predictable by the spatiotemporal context, and play a role in efficient encoding of information.

In the ERC Starting Grant SPATEMP, we test this hypothesis in humans and non-human primates by using deep neural networks to quantify predictability in natural scenes, and investigating the relation of predictability to neural signals in visual cortical areas. The Proposal further examines how this relation changes with learning, what the contribution of gamma rhythms is to perception, and how gamma rhythms emerge mechanistically from recurrent interactions within and between areas.

This research sheds light on the way in which the brain efficiently encodes information and how neural populations flexibly communicate with each other, which may have important implications for the design of energy-efficient neural networks. Furthermore, rhythmic activity is a fundamental property of processes in the body and the brain. Cortical rhythms are distorted in many brain diseases, e.g. Parkinson, Epilepsy, Alzheimer’s disease. Furthermore, brain stimulation at gamma rhythms has been shown to counter neural degeneration. Thus, the current findings can inform mechanisms and treatment of these diseases.

Schneider, M., Broggini, A., Dann, B., Tzanou, A., Uran, C., Sheshadri, S., Scherberger, H., Vinck, M.
A mechanism for inter-areal coherence through communication based on connectivity and oscillatory power.
Neuron.


Prediction games in the brain.